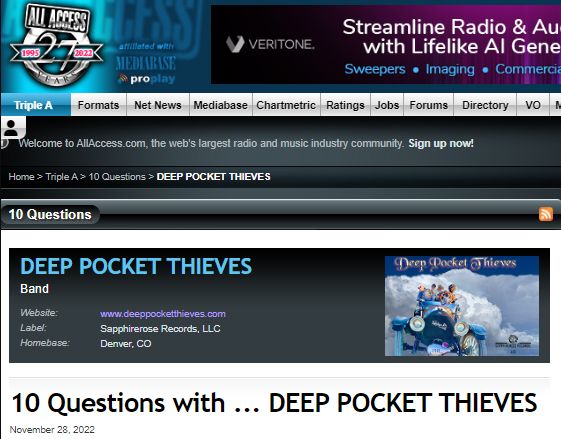 The name, “Deep Pocket Thieves” came from a musical goal that the groove, (the “Deep Pocket”), along with the melody and vocals were the most important aspects of a song. That is what we try to focus on when writing. As far as the “Thieves” part of the name, we have always identified with the rebel/pirate side of art and as artists.

That’s quite a resume! Please tell us about your experience working with these legendary musicians?

LAREA EDWARDS: I met David Foster through a mutual friend, producer and musician Ric Padmore. I put together a choir for a performance at Denver's Paramount theater. I've also organized choirs for One Republic at Red Rocks. I do a lot of work with Nathaniel Rateliff. I sang on his album and the Top 5 song “Redemption,” from the “Palmer” movie soundtrack which stars Justin Timberlake. I also sang on Rateliff’s “Tiny Desk” performance, and the NBC's talent show, “Songland,” as a background vocalist for the winning song.

JIMMY AYERS: When I played with Billy Ryan and Black Irish, Butch Trucks (drummer for the Allman Brothers Band) became our producer. Our drummer, Bobbie Berge, had played with fellow-Colorado guitarist Tommy Bolin, so I ran with many of the musicians in those circles. I wish I could put into words what a thrill it was to work with Butch Trucks and award-winning sound producer Kurt Kinzel. You’ve just got to hear the music to believe it!

MAHLON HAWK: Working with Bernard Purdie was a joy. He played drums for Aretha Franklin for years, and he also worked with Steely Dan. We hit it off quite well. We did our first gig in Phoenix, AZ with the late great Grammy Award winner Carmine D’Amico. The gig was unannounced and it spread by word of mouth. We played to a packed house. It was an epic evening of solid musicianship. A series of gigs followed thereafter.

I did a recording session with Elliot Easton of The Cars at Cherokee Studios in Los Angeles for Connie Rae Knapp’s album. The experience was wonderful. Elliot’s playing was so incredible, I told him it took me all the way back to my early days of listening to and appreciating the masterful touch of blues guitarist Michael Bloomfield.

I met Jeff “Skunk” Baxter while recording with the band “Joshua" also at Cherokee Studios in LA. It was “Joshua’s" first experience as a group recording an album.

We rehearsed our exact show for months on end before we hit the road, and we perfected the show right down to the smallest detail. Our work ethic really showed when we began recording. It only took 12-hours because we were so well-rehearsed.

SETH BENNETT: I have played drums for years with some well-known Denver bands including; Stuntdoubles and Redline Defiance. The Deep Pocket Thieves are probably the best-known group that I’ve played with… so far.

LAREA EDWARDS: I've organized choirs for One Republic at Red Rocks, and my 10th time performing there was with EDM artist Opiuo. I've performed at Red Rocks about a dozen times, mostly with The Moderators and Youth on Record. I've also performed with the Colorado Symphony Orchestra, singing with several groups, including DeVotchKa.

I teach thousands of Colorado Youth in a project called Black Music Matters in association with Vocal Coalition Youth Choirs. We are in our sixth year now. I have also been the musical director for a Donnie Betts production.

One of my favorite memories was meeting my hero YoYo Ma. After we sang with/for him I tried to bow down to him. I told him what an honor it was. He had been my hero since I was a four-year-old violinist. However, he bowed to me as well!!! We were on the ground trying to "out bow" each other. That was one of the BEST days of my life!

I have sung for Presidential Candidate Bernie Sanders twice. I have sung at just about EVERY Colorado venue. From Grand Lake and Lake Mishawaka to Fort Collins and Grand Junction. I've done the Fillmore, the Ogden, The Bluebird, Levitt Pavilion, Aspen, Vail, all of the major venues, clubs, and bars.

SETH BENNETT: I played Red Rocks with Redline Defiance for my birthday weekend in 2006. Having seen so many amazing shows and having dreamed of playing there for so long, I felt like I was finally home playing that stage. It was definitely a bucket list experience and one I’ll never forget!

MAHLON HAWK: Denver has always had a great Jazz & Blues scene. I played at many Jazz/Blues clubs including Dazzle, Jazz at Jacks and the iconic El Chapultepec, The Buffalo Rose in Golden, and Little Bear in Evergreen. The Jazz/Blues club Nissi’s in Lafayette, CO is where I performed with the popular Boulder-based band Meniskus.

Violin/Fiddle… Potato/Patato… I just hope the people like it. I enjoy the freedom I have in DPT to just play around and play along.

I've been with the Flobots for almost a decade. I'm actually performing with them this weekend! We're childhood friends. You can hear my voice on several songs on the album, “Sleeping Giant.” Mackenzie Gault is the original violinist on their big hit “Handlebars.”  Occasionally, I will play along on stage with their current violinist, Sarah Hubbard.

LAREA EDWARDS: I developed my singing style in my church. My sisters and I sang at least three times a week for decades. When I my husband, the blues sound matured.

I've done some tours with my sisters in our Gospel group, Spirit of Grace, along with The Gnomies, and the Flobots. Spirit of Grace has an open door at the House of Blues in NOLA. We have been dubbed, “The Miracle Sisters" by the engineers in the major studios in Colorado. We have sung on over 100 albums. The rest is history.

JIMMY AYERS: I learned a lot from what Duane Allman had brought to the world of slide guitar and the Southern Rock sound. I was also very influenced by the slide guitar work of many other rock guitarists including; Jimmy Page, David Gilmore, Joe Walsh and others. Later, I learned to love the dobro work of Jerry Douglas who plays with Allison Krause and Union Station in the bluegrass world.

SETH BENNETT: My dad used to pound out ragtime on an old upright piano, and I loved the playful aggressiveness of his playing style on what is in fact a percussion instrument. Drums were a natural progression for me. I love many styles of music and I have played metal, rock, punk, funk, ska, swing, reggae, blues, disco, house/trance, breakbeat, drum & bass, and even some ranchero over the years.

I started on accordion and violin. Those instruments led to an interest in piano and guitar. I bought my first guitar at 14 and my first Hammond organ shortly after.

Bass player Mahlon Hawk won an Emmy Award? What’s that all about?

MAHLON: In 2003, as part of the Sound Cellar Band, I helped to create and perform the 2004 Emmy Award winning score for the documentary “Transitions Throughout The Lifespan,” for KOCE/Orange County California’s PBS television station with music producer Bob Stewart.

We were honored to be named the winner of the Mile High Blues Society Competition. We had a great time representing Colorado in Memphis where we performed with some of the best blues-bands in the world.

LAREA EDWARDS: I had a close friend who let me down in a big way. As I started to complain, I asked myself why I expected a different result. Why did I trust them in the first place? Then I couldn’t get the melody out of my head. It’s really a homage to personal growth. The song says to evaluate and elevate your decisions, but don’t take yourself too seriously.

We were all very excited when “Locomotive” went to #1. We were very thrilled, and it was totally unexpected. The song was written by local Colorado musician John Alex Mason who is no longer with us, so we were especially happy to be a part of his legacy.

We recently finished our video for “What Was I Thinking.” Making that video was a lot of fun. We will be releasing our new album in 2023.

Behind The Song: Deep Pocket Thieves

The Deep Pocket Thieves are on a roll. In early 2020, the band had a #1 single on the What's-in-Store/All Access Currents Chart, and they had recently emerged victorious in Colorado's Mile High Blues Society competition. We all know what happened a few months later as the world went into lockdown, and DPT were also not immune from catching a serious case of the Covid-19 bug. Bouncing back from adversity, the band hunkered down and began writing again. Eventually, the song, "What Was I Thinking" emerged as a fan favorite.

When asked "what she was thinking" when she wrote the lyrics to the song, vocalist Larea Edwards explains: "I had a close friend who let me down in a big way. As I started to complain, I asked myself why I expected a different result. Why did I trust them in the first place? Then I couldn't get the melody out of my head. It's really a homage to personal growth. The song says to evaluate and elevate your decisions, but don't take yourself too seriously."

"Blues bands come and go with varying degrees of success and ability, so it's no surprise that Colorado has a plethora of new bands. Deep Pocket Thieves blends the diverse backgrounds and musical histories of its members into a delicious melange of blues, soul and rock, with just a bit of funky R&B.  The result:  a band that is so good they're heading to Memphis to compete in the International Blues Challenge on behalf of the Mile High Blues Society.  With each of the members bringing years of experience to the table, DPT has quickly established itself as a local favorite.  Their first EP is a gold mine of deep and heartfelt blues, soaring harmonics and vocals.  Lead vocalist Larea Edwards,  whose background includes singing in a church choir, has not just a fabulous and strong voice, but a charisma and presence like few in the industry. Larea leaves no doubt that her talent is soul-deep, and the rest of the band brings that same depth of ability and feeling.  With Jimmy Ayers on keyboards, Jim DeSchamp on guitar, Jodie Woodward on bass and Scott Rivera on drums, DPT is a rich blend of amazing talent and years of experience.  Four of the five offerings on the EP are originals, and the cover of John-Alex Mason's Locomotive is nothing short of magical.  The EP starts off with the original Memphis Saturday, a sultry, smoky, deep-down soul-filled blues number that showcases the talents of Larea's vocals and Jimmy's understated keyboard.  http://wolfmannsmusic.com/Last%20In%20First%20Out.html

The Deep Pocket Thieves are going to Memphis!  On Sunday, August 7th the DPT was selected by the judges for the Mile High Blues Society (MHBS) to represent them at the International Blues Challenge (IBC) in February 2017.  After competing with many local bands in Colorado, the DPT emerged as the winner of the MHBS local competition.